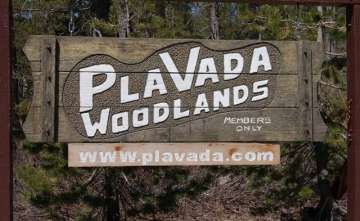 The Pla-Vada Woodlands are located north of Interstate 80 and about 3 miles from downtown Soda Springs. Pla-Vada is a private community that borders the South Yuba River on one side and forestland on the other. . and derives its name from its placement in two counties – PLACER and NEVADA. Beautifully situated among the trees and forestland, the development is relatively small at around 200 residential lots.

Pla-Vada is the place to be for snowmobilers, due partly to its geography and partly to the fact that not all roads used to be plowed (they are now).

Scroll Down to Search Pla-Vada Homes and Land for Sale